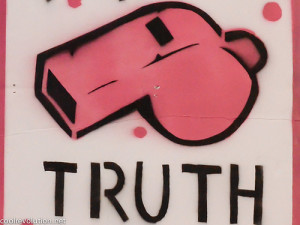 Looking at the submissions we had so far, we can only say one thing, we really put the resistance back in OHM. From open source cryptography to makerspaces, from citizen reporting trainings to a very special roundtable discussion on whistleblowing. Especially digital whistleblowing.

Digital whistleblowing was has been around for a really long time, Cryptome, a digital library host since 1996, was setup by architects John Young and Deborah Natsios. Through out the years, Cryptome has been responsible for various high-profile publications. Their method is simple, they will publish anything they will get and it is up to the reader to scrutinize the material carefully.

Next to Cryptome, the most famous online whistleblowing platform is WikiLeaks, which was founded by activists from around the globe with Julian Assange acting as spokesperson and editor in chief. Wikileaks has been responsible for a series of important disclosures through out the years, most notable; Collateral Murder, Iraq War Logs, Cablegate and the list goes on.

Snowden’s revelations has shown us that metadata is being collected by a great amount of governments. Not only most of Europe has been doing this for years already, the United States has been conducting the same practices for several years, next to saving the full-content that is flowing through the cables. And neither has catched a lot of criminals, but could pose a serious threat to digital whistleblowers. How dangerous is this for whistleblowers leaking information through online platforms? Does digital whistleblowing still has a future? How do we threat model and explain this to whistleblowers? Or should we go analog and go back to brown paper letters? These are just a few, of the most pressing questions that need answers rather sooner then later.

But even if we manage to sort out the technical difficulties, there remain some other ‘issues’ that need to be solved. Bradley Manning, who is on trial for leaking material to Wikileaks, has been in prison without sentence for 1155 days as of today and 21 days into court martial. He has been stripped naked every night and woken up every five minuts because he was on POI watch. Thanks to Manning, we know about an US military video depicting the indiscriminate slaying of over a dozen people in the Iraqi suburb of New Baghdad — including two Reuters news staff. The video was dubbed “Collateral Murder” and was released in April 2010, next to many other significant historic material. Manning has exposed US war crimes, instead of prosecuting the people conducting the war crimes, the US is trying to put the whistleblowers behind bars.

The crackdown on whistleblowers and the journalists working on the material has been intensified the last few years. We have seen an unprecedented outcry by the Obama administration to conduct a harsh policy on the crackdown of whistleblowers. It is investigating journalists like Julian Assange, Barrett Brown, Glenn Greenwald and even AP journalists. There is a grand jury investigating the WikiLeaks organisation and associates in Virgiania, US. Often, associates of the WikiLeaks association are harashed at borders.

Barrett Brown is facing up to 105 years in prison for linking to leaked material in an online chatroom. The leaked material had been obtained by Anonymous and been researched by Barrett’s research group ProjectPM. Barrett was conducting his task as a journalist and exposing certain companies from the surveillance-industrial complex like Endgame Systems. The charges pressed against Barrett are of a political nature.

Clearly, we need a debate on how to improve the situation we are in right now on a technical, social and political level.

The whistleblowing panel at Noisy Square

This panel brings a great amount of knowledge about this field together, whether it is on a technical level, an editorial level or a legal level and we invite you, the audience, to ask questions so we can learn what the future will bring society for digital whistleblowers.

The people taking part in this roundtable are:

He was a former senior executive at the National Security Agency who blew the whistle on multi-billion dollar program fraud and cover up as well as the secret unlawful surveillance program. The Department of Justice launched a criminal national security ‘leak’ investigation of Mr. Drake in 2006 then prosecuted and indicted him under the WWI-era Espionage Act in April of 2010 as reprisal and retaliation with ten felony counts facing up to 35 years in prison. However their very public case against him collapsed under the weight of truth in both the court of law and the court of public opinion on the eve of his scheduled trial in June 2011. He is a former Cold War-era airborne crypto-linguist and electronic warfare mission crew supervisor who specialized in East Germany. He learned to program on an 8-bit Atari 800 Home Computer.

She is also a former ethics adviser and attorney to the United States Department of Justice who came to prominence as a whistleblower after she disclosed that the Federal Bureau of Investigation (FBI) committed ethics violations in their interrogation of John Walker Lindh, the “American Taliban” captured during the 2001 invasion of Afghanistan, without an attorney present, and that the Department of Justice attempted to suppress that information. The Lindh case was the first major terrorism prosecution after 9/11. Her experience is chronicled in her memoir TRAITOR: The Whistleblower and the “American Taliban” published in early 2012. The last chapter of her book is focused on the prosecution of Thomas Drake by the Department of Justice.

Hermes Center
The Hermes Center for transparancy and digital human rights has the following mission:

Pedro Noel
Pedro Noel is a Brazilian Internet activist and investigative journalist. He performed a significant role in 2011 with the Indignados and Occupy movement, helping organize the 15th of October protest internationally. He is a philosopher at the University of Salamanca. Noel is editor and content manager of the Associated Whistle-blowing Press and has been working since 2010 reporting on different whistle-blowing sources such as Wikileaks and the hacktivist group Anonymous.

Dr. Suelette Dreyfus
Author of “Underground”, book about early hackers, translated into 7 languages. Research Fellow, University of Melbourne, Australia, Dept of Computing and Information Systems. Studying the impact of technology on whistleblowing. Principal Researcher on the World Online Whistleblowing Survey, the first online survey about public attitudes to whistleblowing to be run in 10 other languages. She also does work in the e-health and e-education areas.

Smári McCarthy
Is executive director at the International Modern Media Institute (IMMI) and co-founder of the Icelandic Digital Freedoms Society. He founded the Shadow Parliament Project, an attempt to crowdsource democracy, co-founded the Constitutional Analysis. Support Project (CAST) and has worked on developing and spreading digital fabrication technology through Fab Labs and Hacker Spaces.

Jurre van Bergen
Young enthusiast with a passion for anonymity, privacy and cryptography. He’s one of the co-founders of the Amsterdam hackerspace and organizes various IT-security and info-activism events in the Netherlands and abroad. He develops new technology or teach activists/journalists digital security.

He will moderate this roundtable.

See you at the digital whistleblowing roundtable on the 3rd of August at 16:00!