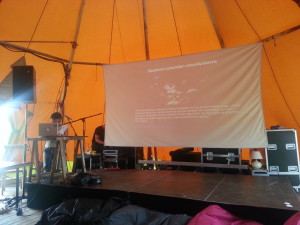 Miriyam Aouragh stepped on the stage wearing a T-shirt from the Stop the War coalition. She said that she would not have come to OHM if it weren’t for the principled counter-stance that Noisy Square has taken.

Her talk about “techno-counter-revolutions” started with a quote from Karl Marx:

According to Miriyam we need to be subjective, even as academics, otherwise we cannot be critical. She sees two issues that need to be problematized in the context of the Arab revolutions:

The idea that technology is owned for counter-hegemonic struggles is too naive. We need to look at the actual political and economic results.

According to Miriyam we should aim for a “socialist internet privacy”. By reversing the understanding of privacy and surveillance from what they are now we can get rid of the anonimity of the wealthy. We should demand more surveillance of corporations, banks and take away their privacy (which is very much about controls of the means of productions).

Next to that, we also need to demand the disclosing of the algorithms that are used by social networking sites like Facebook. We need to strip Mark Zuckerberg from his right to intellectual property and we need to scratch the surface and understand how the Facebook users are being exploited economically. This is important because it is now becoming very difficult to protect our security online. Web 2.0 has become an integrated platform: it is not just about our own information anymore. Intelligence agencies can combine data and make interferences.

Do we wait until we have full security before we act? Of course not: revolutions are made by people who are willing to take risks. This is why it matters a lot who we allow in our tents and at our festivals.

Internet as activism is potentially important, but will always depends on the balance of forces in cyberspace and on the ground:

We need to realize that counter-revolutionary use of the internet demystifies ‘techno-power’ and confirms that it is both a blessing and a curse.

She finished her presentation with a set of “human stories” about activists taking risks. Stories about people like Basil Al Sayed:

or this Syrian capturing his own death:

and finally the incredibly powerful “anthem” of the Syrian revolution: